I am a homeschooling mom of 6 grown children.  The order is, 3 girls on top and 3 boys on the bottom. My youngest son is 18 years old now.  He is a philosopher at heart, and a warrior from birth.  When Simon was an infant, he would scheme!  I could see it in his face.  If I was out of breast milk and he wasn’t finished nursing yet, he would look at me with such a look of disdain as if to say “What do you mean you’re out of breast milk, I don’t think so…Wahhhhh” and then the face that said, “you just wait, I”ll get you for this.”  I thought I was imagining it, but no…. As he grew, it continued.   When it was time to put away all toys and get ready for meals, I would get “the look” again.  When Simon was about 6 years old , he hid my music one evening before I had to leave the house to teach an aerobics class.  I  asked  around for it and Simon would have this “look” on his face.  You know the one, where he is guilty, but happy about it? I said to him “So, Simon, where is my music? Do you have it?”

He grins and turns away.  “You didn’t let me have dessert.”  He says.

“Then you won’t get your music, will you?” He says, quite sure of himself with no dread of any repercussion  (amazing!).  I need to get to class, but I know better than to bribe him.  That would just be starting a whole new ball of trouble down the line. (Been there, done that!)  So, I say “Fine, you finish up your dinner and I will be back in a little while.  When I get back, if you have finished, you can have your dessert.”

He looks at me with a sly smile, “Then what are you going to do for music?”

I said, “I guess I won’t have any.” That didn’t go the way he thought it would, and after setting up the recording for the time I would be gone, I was out the door.

I had one aerobic music cassette I had used during the last class still in the boom box, so I planned to use it again. As for the recording, that was a way to figure out who was telling the truth when I got home at the end of a class.  You wouldn’t think in that short a time you would  have anything to sort out.  But, with my clan, something always came up.  So, I hid the tape recorder near the living room and the kitchen where most of the “action” took place and made sure I had a new tape in place to record.  Many times I would get home and the kid’s would have many different versions of the same incident to tell.  It caused quite a ruckus to get to the truth.  And we all have our own version of the truth now, don’t we?  So, I recorded everything and when I get home we would listen to the tape together so there would be no need to “make up stories” as I put it. It turned out to be a kind of a “story time” after awhile. It seemed to work so well and the kid’s knew all about it, so I didn’t feel the need to hide the recorder since the tape was one way for everyone to keep their corner of the truth.

Simon still wanted to get one up on me, so the next time I went to my class, (I had already found my music by then) I took out a few favorite cassettes and kept them in my car.  Simon would ask me, “Mom, where is your music? I just want to look at them.”  I said, “Oh, over there by the kitchen table.”  He would get them and hide them again to use against me when I tried to leave. Now just repeat the same scenario from above. This went on every time I left for class, which was about 2x a week (Kid’s that age really do thrive on repetition!). Simon would feel that he had something over me and didn’t seem to mind that it never really seemed to work out the way he planned.

Oh, I had many ways of keeping the peace. The kid’s were always looking to play a game, so I made everything a game.  I did my share of “keeping it real” which to me was the exact opposite.  I liked to make up scenarios. The kitchen witch hanging in the kitchen was one way to get kid’s to behave.  Their imaginations were quite willing to go along with a well made up story, especially if you could embellish the characters in the story with realistic voice make overs. (You can get pretty creative when you have to and your peace of mind is at stake!)  Wanda (the kitchen witch) had a best friend named Pump, short for Pumpernickel. She and Pump would have full discussions at opportune times to take someone’s mind off of a particular situation.  For instance, if one of the kid’s was getting upset for what ever reason, and the tension was escalating to an unreasonable, shall we say “pitch”, Pump and Wanda would start having a loud discussion together.  The child would seem to forget their woes in order to hear what was going on with the two characters in the kitchen. The scenario lasted just long enough to redirect the child’s emotional upset. 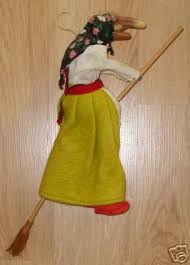 Wanda could throw her voice as far as the car when we traveled.  It didn’t matter that my mouth was moving the whole time that Wanda or Pump were talking, the kid’s were really impressionable and I tried to make the two imaginary friends as fun and interesting as possible.  Pump had a car called the Pump wagon. (Yes, I know what you are thinking, but no one else was…..)  So we kept our eye out for a pink van with a rainbow painted on the side and that was Pump’s car.  I actually did see this very same van one day and decided that this would be Pump’s van.  I made sure to point it out to the kid’s.  After that, if anyone was acting up in the car, I would remark “Oh my Gosh! Did you see that! I think that was Pump’s van! It just went around that corner.  Let’s get closer and see if we can catch up.”  It worked like a charm.  The kid’s had a mission to find Pump’s van and the ride was peaceful for a few more minutes.

There are many, many stories like this one and many other adventures between Pump and Wanda.  As I remember them I may share again some time. And as for Simon, to this day he still doesn’t like to be told what to do.  I purchased him a Camel Pak today to use when he bike rides through town.  I wanted him to try it on and asked him later on in the day (over the phone) if he had a chance to try it out, you know, unpack his winter coat pockets and put some of his stuff in the Pak?   He said, “Yeah, I did.”  I said, ‘No, you didn’t.”  He said, ” I just now put my nail clipper in it as you were talking, so I would be one up on you.”

That’s my boy.  At least he’s honest about it!