I only just started writing about my life and the adventures of my youth.  It was quite different growing up in the 60’s and 70’s.  No internet….. anywhere! Never even heard of such a thing.  No VCR’s or DVD’s either.  Only books and T.V.  I loved to read, I escaped into my fairy tales and adventure stories like Robinson Caruso, and Nancy Drew Mysteries every chance I got.  My nose was always buried in a book.  I loved the idea of being ship wrecked on a deserted island and solving mysteries by following clues.  My favorite T.V. shows at one point were “I Dream of Genie” and “Kung Fu”.  Oh yes, and “Petticoat Junction”!  My mom was a single mom raising 6 children.  We lived in the most amazing house I have ever seen.  It was a 21 room, 3 story, Victorian home. 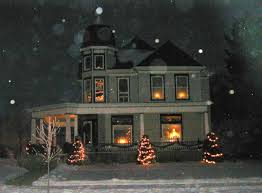 The basement alone had 5 large rooms big enough to stand up right in.  One of the basement rooms had a fireplace in it that looked like it was used for cooking in some ancient days way before my time. This was situated just below the main kitchen above it.  The kitchen in my house had something called a “dumb waiter” located right next to the stove that was set into the large fireplace opening.  The dumb waiter had a door that opened up to an inset box.  Evidently, you would put a cup of tea, or something to eat in the little box, close the door and use the pulley system to deliver the food upstairs, within the walls to the 2nd and 3rd floors.  We loved to use it as kids!  My mom would discourage it because she said she didn’t want us to break it.  What the heck, it had been in service for at least 100 years before we got our hands on it?  The house was built in 1865!  Needless to say, we played “Maid and Royalty” games amongst each other every chance we got!

There was also a spot under the rug in the living room that if you stepped on it, a bell would ring in the kitchen!  Oh, we were living in “Downton Abbey” now! 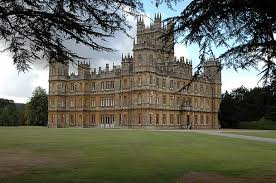 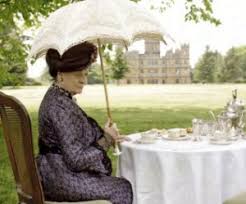 One of the openings to the dumb waiter was in a room opposite the kitchenette on the 3rd floor.  We were all scared of the 3rd floor.  It had an eerie feeling to it, like someone was still there in the house from ages before us.  (When my mom looked at the house to purchase it, she wasn’t allowed into the master bedroom on the 2nd floor, since the woman of the house had died and was still laid out in the bed!)  That would explain the “cold spots” in the driveway that my dog Duchess wouldn’t walk through.  I would stand in the driveway and call her to me, and she would bark and bark and never come any closer to me as long as I was standing in that spot.

Years later I realized why….

The 3rd floor had 4 large rooms and a bathroom.  The bedroom at the top of the stairs is where my grand mother later took up residence.   Finally, we had a recipient to send tea up to!  Her room had a large walk-in closet that was quite dark (no light) and if you ventured into it deep enough, you would bump into an old vintage sewing mannequin.  Imagine how you would feel as a youngster exploring your Granny’s dark closet (with a flash light of course) and coming face to face with this… 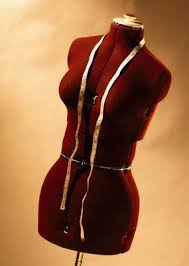 It stood as tall as a 5 year old child and gave us all the creeps!  So, we decided to only go into that closet when we were in pairs of 2 or 3 and only then to play “Green Ghost”, the game my sister and I got for Christmas that year.  It is a game you play in the dark since all the game pieces and the board glow in the dark.  You would go around the board with a little glowing ghost and when you came upon a trap door, you would have to put your hand in there and try to figure out what you were touching….It could be something like worms,  gooey stuff, or feathery spiders.   Hey, I did say I liked adventure… Just not alone! 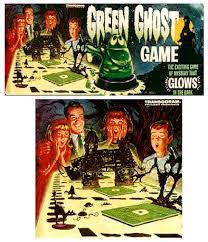 I was dating a boy from the other side of the tracks.  I don’t mean that in a bad way, he literally lived on the other side of the railroad tracks in town.  He would come up to the house (we lived at the top of a steep hill called Mount Avenue) and we would take my siblings out to sleigh ride in the winter.  The town closed Mount Avenue during and the day after heavy snow storms so that the kids could go sleigh riding down it.  We would take my brother John and Bambi and Cyd to go sleigh riding during times like this.  It was great fun and most of the neighborhood was there.  The street lights would light up the street once it got dark around 6pm.  Most families came and brought thermos’ of hot chocolate to share with the local kids.  We had a blast!  In those days we got quite a bit of snow in the winter in New Jersey. 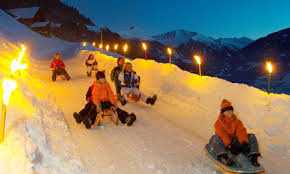 Now, we had an old couch at our house that we finally decided to get rid of.  At that time, you simply left your old discarded furniture and garbage out on the curb for the garbage man to take away on garbage day.  That couch stayed at our curb for weeks because for some reason they wouldn’t take it!  I finally got sick of seeing it there and hearing everyone complain that the garbage men weren’t doing there job.

So, my boyfriend and I decided to do something about it.  It was one of those snow storm days when they had just closed off Mount Avenue.  We waited for the curfew for people to stop riding the hill (which was 9pm) and we put our plan into action.  We carried the couch to the top of Mount Avenue and pushed it down the hill!  It went down, flying like a snow bird in paradise!  Good thing Mount Avenue is a straight away and our couch had good alignment!  She went straight to the bottom of the hill (where the police station was!) and sat there until morning when the town woke up to greet it! ;0) 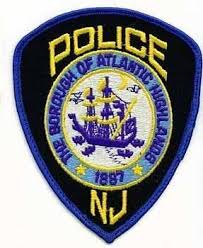 I never saw our couch again, but we gave it the best send off we could!